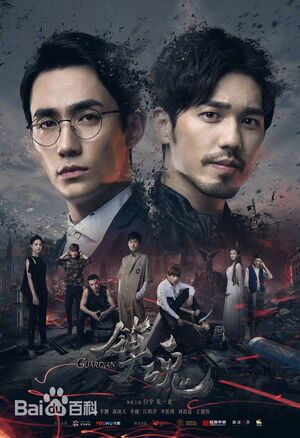 Guardian (镇魂 Zhèn Hún) is a Chinese drama with 40 episodes which first aired on June 13, 2018 on youku, and is officially available on youtube and viki[1] for audiences outside of Mainland China.

It is based on the Boys' Love web novel 'Zhen Hun'[2] by Priest. It stars Zhu Yilong as Shen Wei and Bai Yu as Zhao Yunlan.

The information in this wiki is separated between web drama and Novel pages. You can switch between them using the navigation bar and buttons in all pages that appear in both the drama and the novel.

In the drama, Zhao Yunlan is the head of the Special Investigations Department, a police department dealing with crimes committed by Dixingren, an alien race living underground. Shen Wei is a Dixingren with a lot of secrets.

In the novel, Zhao Yunlan is the Guardian, responsible for relations with the Underworld, and Shen Wei is the Ghost King, who has has been keeping watch over Zhao Yunlan for thousands of years without ever meeting him, until their paths inadvertently cross (again).

Community content is available under CC-BY-SA unless otherwise noted.
Advertisement