Jiajia is one of Shen Wei's students at Dragon City University. She is sharp and engaged and is comfortable speaking up in class, such as when she corrects Professor Shen on his spelling during a lecture. 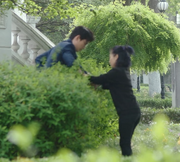 Her field of study is likely bio-engineering, as she attends lectures associated with the topic (to include the one Shen Wei presents in episode one) and can often be found in the vicinity of the biology department buildings (such as when she helped Shen Wei out of the bushes in episode two).

She is the granddaughter of the Chancellor of the university, but typically hides their relationship per his directive in order to avoid any appearance of favoritism or impropriety.

Jiajia was one of two students (along with xiao-Quan) selected to accompany Shen Wei on his field trip to the mountains when he used his university identity as a cover to seek out the Mountain-River Awl.

Community content is available under CC-BY-SA unless otherwise noted.
Advertisement