Unknown, episode 40 of the series

Brown
Ye Zun is Shen Wei's twin brother and the main antagonist of the series.

Ye Zun was born over 10,000 years before the start of the show. He was separated from his older brother Shen Wei by the Rebel Chieftain, and was led to believe that Shen Wei abandoned him to his fate as a slave. Despite having manifested no Dixingren powers, Ye Zun was resourceful enough to be sent after the Hallows and manages to steal them and turn them over to the Rebel Chieftain. However, when the Chieftain was unable to unlock their powers he turned on Ye Zun, causing Ye Zun to snap and finally unlock his first power and consume the Chieftain before taking over the rebels in his place.

Ye Zun was temporarily reunited with Shen Wei on the battlefield only to manipulate Shen Wei into lowering his guard and attempting to kill him. During this fight the Hallows activated before sealing Ye Zun away and effectively ending the war.

Ye Zun has been sealed in the Heaven Pillar for 10,000 years at the start of the series but while he has no physical form, he is aware of his surroundings and able to speak to others outside of his prison. He manipulates people and orchestrates a break from the Pillars through the use of the Merit Brush and various lives he consumes through his peons.

Ye Zun attacks both Shen Wei, trapping him against the Pillar and sapping his energy, and the SID, through the use of nightmares before Zhao Yunlan is able to free Shen Wei and his trapped teammates. He then takes on a persona pretending to be Shen Wei and breaks into the SID with the intention of securing the Hallows. He’s found out through a slip of the tongue by Zhao Yunlan and he kills the two ghosts while trying to kill Zhao Yunlan before the wormhole takes him and Shen Wei arrives.

Ye Zun attempts to get the other divisions of the Haixing Bureau to turn on Shen Wei and Zhao Yunlan and to give them to him at one point. He ends up ‘eating’ Lin Jing and manipulating the mind of Guo Changcheng.

Ye Zun corrupts Dixing and manages to capture Shen Wei again when he returns and tortures him while telling him that ‘I am the master, you (Shen Wei) are the slave’. He acknowledges that if not for his hatred for Shen Wei he would have died in the Pillar many times over. He eventually manages to capture Zhao Yunlan and kills Shen Wei for protecting him from him before devouring him. He’s eventually undone by Shen Wei’s master plan of corrupting the energy inside of himself to poison Ye Zun.

The two brothers have a moment to reconnect in the moments before death, clearing up the truth of what happened in the past before they walk off hand in hand, reunited at last.

Ye Zun, meaning Night Master, is the only name given during the series. It's unknown what his original family name would have been as neither Shen Wei nor Ye Zun make any references to it.

Ye Zun has the ability to consume life and energy. It allows him to take on the powers of the Dixingren that he's consumed.

Other powers shown include:

Ye Zun gains powers and is somewhat in awe.

Ye Zun even adjusts his glasses differently than Shen Wei does. 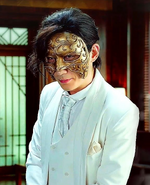 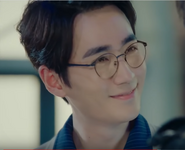 Ye Zun gets called out

Ye Zun is having the time of his life