Haixingren
WARNING: This page contains spoilers through the end of the series.

Zhao Xinci is Zhao Yunlan's father and was the first chief of the SID. He is extremely dedicated to his work, to the detriment of his relationships with his wife (Shen Xi) and son [ep17].

He is practical and believes that the end justifies the means.

Approximately 20 years before the beginning of the series, while chasing a criminal, he was inhabited by an ancient Dixingren named Zhang Shi. Zhang Shi promised not to take over his body or commit any crimes, and claimed there was a chance that if he were to be cast out, Zhao Xinci's body might also be harmed. The practical Zhao Xinci determined that since this had already happened, there was no sense in fighting it, and suggested that Zhang Shi's knowledge of Dixingren would be useful. After they joined forces, Zhao Xinci started closing more and more cases. [ep31]

His wife was killed in an incident with a Dixingren criminal - he refused to negotiate with the criminal, saying that his wife would understand, and the unnamed criminal used his power to blow up both himself and Shen Xi in front of Zhao Xinci and Zhao Yunlan [ep17].

After his wife's death, he became obsessed with killing all Dixingren, and earned the nickname "Dixing Hunter". [ep31]

He doesn't approve of his son's leadership style or his personality, and they have had a tumultuous relationship for many years.

"As long as it benefits the people, I do not think my compromises are wrong."

In the novel, Zhao Yunlan's father does not have a first name, but is only ever called Zhaofu ("Zhao's father"). 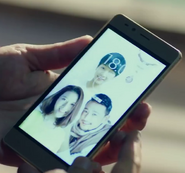 The phone background of Zhao Xinci is a picture of himself with Shen Xi and Zhao Yunlan
Community content is available under CC-BY-SA unless otherwise noted.
Advertisement